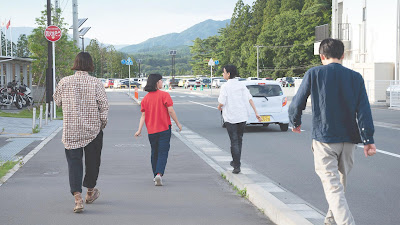 I don't know hw to describe this film simply. The Japan Cuts write up says the following:

Following the earthquake, tsunami and nuclear catastrophe of March 11, 2011, filmmaker Haruka Komori and painter and writer Natsumi Seo moved to live and work in the devastated city of Rikuzentakata, Iwate Prefecture. Collaborating with workshop participants, this beautiful and utterly unique film presents four young travelers—all children a decade earlier at the time of 3/11—listening to local peoples’ stories and reciting what they learned in staged dialogues. This practice is braided together with a story written by Seo set another 10 years in the future in 2031, “Double Layered Town,” following the completion of land elevation work—creating a reflexive experimental documentary sensitive to the complexity of peoples’ lives while planting the seeds for new folktales.

Oh what must this be like in a theater where we can become completely untethered and drift off to this other place without distraction. I say this because five minutes in I closed the curtains and tuned off the light and tried as best as I could to shut out the outside world so I could drift off to the place on the screen.

Forgive me this is a film for which I have  no words. This is a film that is not about plot and details but being in the headspace it creates. This is a film that does what movies do so well which is take us some where else. But in this case the somewhere else is a place beyond words. its a film of feeling- and I want to discuss how I and you felt at cetin points- but since odds are when you read this you may not have seen this film having that discussion is pointless.

Do yourself a favor- go see this film at Japan Cuts then leave a comment about what you think.