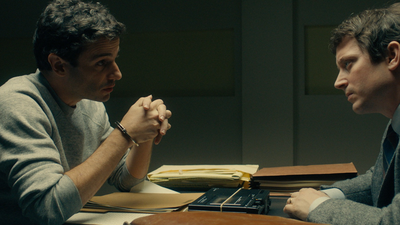 Between 1984 and 89 FBI agent Bill Hagmaier (Elijah Wood) sat down with serial killer Ted Bundy (Luke Kirby) and got him to talk about the crimes of other killers and eventually his own.
This film will buckle your knees. Its a chilling film that takes us into the mind of a mad man. This is a slow building nightmare that will have you sitting bolt upright and just staring at the screen trembling.
My friend Liz Whittmore sent me a short note saying she needed to know what I thought of the film. When it was done I weakly said it was really good. What followed was a discussion of the awards it  will win and what it would be like to see this as a play. Through the discussion and the pondering afterward I realized just how great this film is,
Look for Oscars and awards for the film as well as leads Elijah Wood and Luke Kirby.  Wood is so good you will forget everything he's ever done before. As for Kirby, he's going to end up type cast as Bundy forever. Rarely have we ever been so charmed and frightened by a sociopath.
This film messed me up. I'm so rocked by the film that I need time to process it. Unfortunately I have to get this review up for the festival.
Do yourself a favor, mess up your life and see NO MAN OF GOD. One of the best films of the year.
Posted by Steve Kopian at August 23, 2021