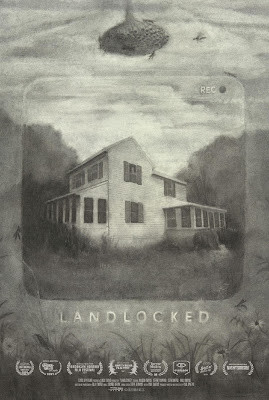 Young man returns to his home to clean out the house after his father passed away and finds a video recorder that can record the past.

One of a kind found footage film is made up of a mix of home video footage director Paul Owens‘ father shot over the years and new material where his family plays themselves. The film is a weird melding of genres and styles that is one part drama and one-part disturbing nostalgia trip. It’s a film that quietly gets under your skin and makes you ponder your life.

This is a hard film to discuss. I mean that in the best way possible. It’s tough because it doesn’t fit any of the typical genres so you can’t use any of the tried-and-true boiler plate language to discuss it. It’s a film that breaks the rules and invents a few along the way.  It’s a film that you have to really watch because it doesn’t have a shorthand. You can’t come and go while watching it and hope to have it have the same effect. You have to sit down, belt in and go with it. It also doesn’t have an endless series of jump scares. It’s a film that slowly builds to its conclusion leaving you bothered.

I kind of expect some of the home video crowd not to get the film at first, especially anyone who watches films and does other things. I say that because watching it alone at night I was fully aware that if I had simply put this on and then farted around with my phone, I’d have not had the same reaction.

This is one a recent brand of low-key horror film (the film SKINAMARINK being another) that sees their audiences as having long attention spans and wanting more than just loud noise jump scares. This is a horror film for those who don’t want just the stereotypical Hollywood crap. This is a film that compares nicely to classic films like THE HAUNTING or the original CAT PEOPLE where the terror is what we make of the shadows and images in the fringes.

What’s most amazing, is that while the film most certainly has fantastic elements, the film can be seen as a drama. Things are so low key and the discussions of our pasts and how we see it are so involving that the film could be argued to simply be a drama with a dash of magical realism. Certainly, this is a film that has a hell of a lot more to say than just “BOO!!”

This film is a gem. It’s a thoughtful film that will get under your skin and best of all make you think.