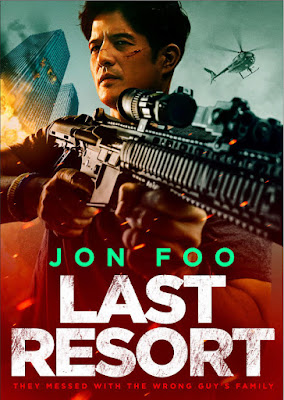 Ex-cop snaps into action when his wife and daughter are held hostage by a crack team of mercenaries after a robbery goes sideways. Working on his own he gives a headache to the bad guys and the cops who have no idea who is taking out the bad guys.

Good action sequences get lost in a film where writer director Jean-Marc Mineo's choices work against the violent ballet.

The first problem is the choice to film the dialog scenes in English despite only two people being native English speakers. The result is a film where no one seems to be giving a good performance, not because they are bad actors but because they don’t understand the inflections of the language. While I completely understand it was probably a choice made to make sales easier, however it undercuts the film.

The second problem is Mineo's pacing.  The sequences between the action sequences are paced much too slowly. There isn’t a sense of danger for  most of the film because there is no sense of urgency.

Lastly the script’s thread bare plot doesn’t make any sense. There are turns  such as a change in the bank security that no one is aware of (Really? No one knew it happened?), leave you shaking your head in a WTF sort of way.

…except for the action. The action sequences are fantastic. That’s why you want to see this film. The action is really good.

Worth a look for action fans.