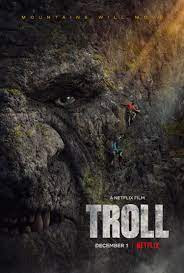 I absolutely love TROLL. It is a loving giant monster film that just seeks to be good story and nothing else and ends up be entertaining as hell. (Its one of my favorite films of 2022)

The plot has a giant troll being released by the construction project. Officials are certain what it is since there is no good footage of what is causing the mayhem. They bring in a paleobiologist who doesn’t want to believe her crazy father, who always talked of Trolls, was right. Very quickly she learns father knew best. As the military tries to stop the troll, they also are trying desperately to keep the [public from learning about the beast. Meanwhile our heroine realizes that modern methods aren’t going to work and tries to come up with a method to stop the rampaging monster.

Featuring good effects and a great cast of characters TROLL is a great deal of fun. It doesn’t reinvent the wheel, but it simply tells a good story. I like that it doesn’t  hit every expected plot point, there are some nice variations. I also like that there is some attempt late in the game to understand that they are killing the last of their kind.

I loved the films low key approach and it’s sticking close to reality by not going for over blown effects sequences.

I know several friends who were disappointed in the film, and I understand that, but I think their displeasure comes not from the quality of the film but from expecting something else, something bigger and groundbreaking, which TROLL is not. I hope that they will see the error of their ways with a second viewing where they can just take the film for what it is.

And what it is is a wonderful care free popcorn film.