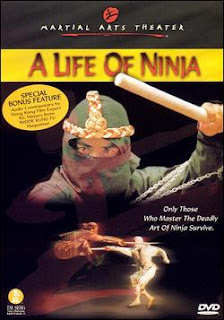 I saw this film ages ago and instead of rewatching and reviewing the film again (you'll see why I don't want to do that) I'm presenting my IMDB review.

This is the story of a family under siege by ninjas. A rich man has split his company between his two daughters. One (who drinks to excess) is married to a womanizing sleaze who built the company up to ten times its value. The other seems to spend her time and money trying to master sword fighting techniques. No one gets along. The family begins to be besieged by attacks by a band of ninjas. It begins with am attempt to frame the husband for the murder of one of his flings and escalates from there. The unmarried sister asks a sword teacher friend to help protect the family once the attacks become more deadly.

How do you define disappointment? I suspect that this movie is a good definition. This movie begins with one of the best sequences ever in an exploitation film, the ninja training school. We get some of the funniest scenes ever put on film as the ninjas go through their paces, are bent into odd shapes, and engage in mud wrestling. Yes, mud wrestling. Who knew ninjas trained by mud wrestling? Its absolutely jaw dropping in its exploitation silliness (and makes this one of the best sequences in any exploitation film ever). Nothing that follows, not even the women being dunked in the water with ridiculous huge ice cubes floating near by, can compare with this sequence. Everything, the entire 90 minutes, that follow is all down hill from there.

Where the movie falls down is that after the ninja training the film basically becomes a reasonably straight forward martial arts mystery. Actually it's a rather dull martial arts mystery. The people aren't particularly likable, the action is run of the mill and while there are a few twists and turns there is nothing to liven up the proceedings. Its really dull. Frankly, I found it hard to stay awake, not because I was tired, but because I was bored. Certainly the film gets a few points because I was kind of curious to see what the ultimate outcome was, but it really wasn't worth the effort.

This film isn't worth bothering with unless you need to see every ninja movie ever made. That said, if you know anyone with a copy, you will want to borrow it, or ask them to show you the opening five minutes, that is worth seeing (though not worth the price of a rental since it is so short)
Posted by Steve Kopian at July 04, 2013