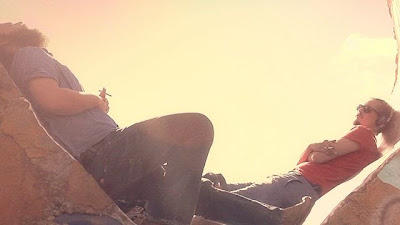 Ben and Mickey are traveling across country trying to avoid the zombies. Shaggy haired Ben is tasked with killing the zombies that they run across while Ben just listens to the music in his headphones. You would be hard pressed to understand how they ended up as companions but they are now friends journeying through the backwoods of New England.

Kind of an inde art road movie with zombies about some sort of grand trip to where ever (the promo material relates it to Old Joy, which I haven't seen) where the film is less about the trip than the inter-relationship between the characters. There are long sequences where things transpire in real time, long pauses where nothing much happens and occasional bursts of horror as the zombies attack.

For me this is an over long film that had you removed the zombies wouldn't have been much of anything. I'm sorry but to my eyes this is a film that is too artfully crafted to be much of anything. The buddy film seems at odds with the zombie stuff. While I certainly will agree that should a zombie apocalypse ever happen you'd end up with "buddy film" material, I doubt very much that this is how it would go down. The film also drags thanks to the long extended sequences where they sit in the cars, or houses or where ever.

A large part of why this film didn't work for me is that the world it operates in doesn't seem real. Where is everyone? Why does everything look so neat and clean? Logic and reason dictate that for things to be this far gone it's been awhile but nothing seems weathered, many of the homes seem well kept-despite no one being around- these guys are not the only ones walking around. Very quickly into the film I turned off because there was too much I couldn't accept.

Personally this is another reason why I'm now sick to death of zombies. Given a choice there are other better undead films at Fantasia and you'd be better off seeing those.
Posted by Steve Kopian at July 23, 2013