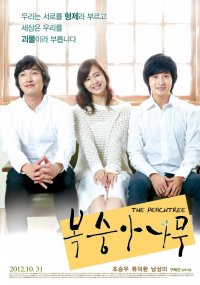 Based on director Ku Hye-Sunown's illustrated book, The Peach Tree tells the story of a pair of brothers conjoined in such away that the face of one is on the back of the head of the other. One has complete control  of their body while the other has none. Kept locked away from the world things are turned upside down when a pretty young woman comes to the house to help with a book one of the brothers is writing.

Told in a style that is best described as a fairy tale, the film ponders a variety of questions, not the least of which is what would you do for you siblings?

As I said at the top I'm throwing up my hands and saying with this one you're on your own. The reason I'm doing that is despite my feelings which are mixed, I've read some reactions to the film that are extremely positive. These positive reactions were from people who clicked with the film and as such found it a deeply moving experience.

I on the other hand never clicked. I was really annoyed by the dark whimsy and kind of wished that the story had been told in a more straight forward manner. Yes the central story is powerful and moving but the added allegorical elements  of the parents initially raising a tree as a child just distanced me. There was something about it all that just made it too weird even for me.

If you like fairy tales and off kilter films give this a shot. If not this may not be for you.
Posted by Steve Kopian at July 07, 2013