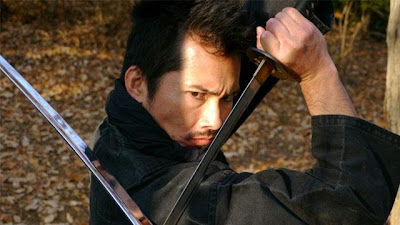 Making it's North American premiere at Fantasia Fest comes BUSHIDO MAN from Takanori Tsujimoto the director of the HARD REVENGE MILLIE films and co director of KILL with Mamoru Oshii. Depending upon you're feeling for those earlier films will determine how you feel about this film.

The plot of the film has the title character reporting to his master about how he has traveled around the country taking on the masters of various styles of battle (kung fu, pole fighting, knife fighting ect) and learning their secrets by eating as they do.

You can probably suspect by that brief description that this film is  essentially a series of fights and meals.Yea, there is something kind of going on beyond that but for the most part that's all there is to this story. While the battles are well done (and are spoofy taking on Jackie Chan, Shaw Brothers, Korean gangster films, cowboy movies, ect)  the rest of the film is largely disposable.

I liked the film but in all honesty I don't love it. I'm sure had I seen this in a theater full of action fans I would have liked this better, but as a movie on its own terms its just okay. If you're seeing it in the theater with a crazed crowd you'll have a blast, if you're not... you may want to take a pass.