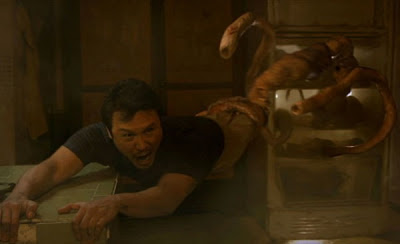 Yes it's about a a killer fridge....and it may be the the best film about a demonically possessed appliance you'll see at this year New York Asian Film Festival

A young woman returns to her home. Her mother has just died found in the title appliance, after apparently killing a large number of people. Her father has gone missing and believed to be dead. As she sets up her home again, her neighbors give her strange looks and weird things begin to happen. She sees dead things in the fridge. Eventually the fridge starts to feed and it isn't long before she and her friends have to find a way to stop it.

I know you're dying to know how it is...

Well there are a couple of ways to answer that....

If you saw this film last night at midnight I'm guessing you had a damn good time especially if you had the typical rowdy midnight NYAFF crowd.

If on the other hand you're going to see this on the 10th in the middle of the afternoon you maybe less enamoured of the film.

The trouble is that this film can be damn slow. Yes the fridge stuff is wonderful and creepy and the sort of thing that will give you nightmares, but the film takes the better part of a half hour to get going, and then slinks along through the second one with an occasional weird as hell scene before it really gets good in the last half hour or so. Trust me when this film clicks its just damn freaky. I kept going "that is so wrong" repeatedly. I truly love the weird crap that goes on. What I'm not a huge fan of is the slog to get through it.

All of that said, if you love weird monster/horror films this film is a must. If you can see this with a rowdy audience of friends or strangers its worth seeing. If you can't see it with friends or don't like monsters, move on to other things.

However---- If you want my ultimate verdict- I will be picking this up on DVD because the monster stuff really is that damn cool.
Posted by Steve Kopian at July 06, 2013