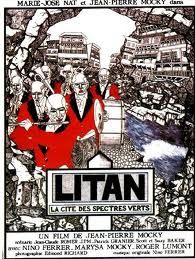 What is this film and why have I never heard of it?

The plot of the film has a couple in a small town during a festival. Many people are wearing masks.More are behaving strangely When the aftermath of an accident  puts the couple on the run, things begin to resemble the young woman's dreams.

Michael Little of All Clues No Solutions describes the film as follows:SILENT HILL and THE WICKER MAN meet ALTERED STATES directed by Zulawski or Jakubisko. If you've seen the film you understand that makes a great deal of sense. (All Clues by the way is selling the DVD)

What is going on exactly I'm not sure. I think it has something to do with spirits shifting bodies or coming back from the dead or something. Its not entirely clear. Not that it matters since this is the sort of strange film that will delight those who love head games. Seriously what is this all about? I have no idea but I'd love to hear your thoughts.

Nominally a horror film, the film isn;'t scary, rather it's more disturbing and troubling. Like the dream that opens the film the narrative is operating on its own unique way. The logic isn't dream like but something more...odd.The masks and odd behavior that seems silly early on becomes not only acceptable by the end, but seems rather normal.

As I said the film took a little bit to grow on me, but once it did I found it to be a film who's place off the horror film map puzzles me. 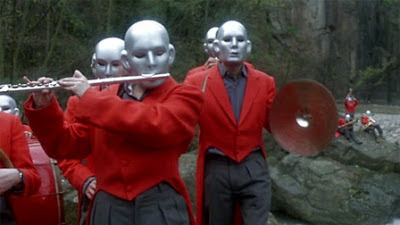