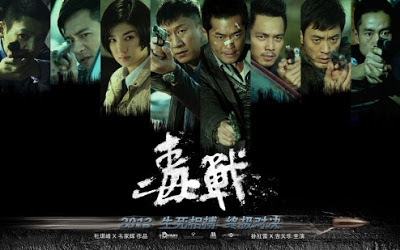 Got a series of texts from Chocko about the DRUG WAR screening at Lincoln Center. For those who don't know it was one of the hotest tickets for the festival with people getting out of their sick beds to go.
The non-spolier filled portions of the texts follows:

WOW WOW WOW DRUG WARS!!!
Grady did the most awesome intro to the film in under 3 minutes. Grady timed himself with the intro and said he'd do it in under 3 minutes.
He covered the new Chinese Censorship laws, the fact that Hong Kong can't afford to support movies with more than a million dollar budget, how critics said Johnnie To sold out by making a co-production with the mainland. He pointed out that Mainland actors were cast as cops and all the villains were hong kong actors he spoke a mile a minute.
It took 3 people to intro drug wars Gavin, Samuel and Grady. But G-dog really hit it a grandslam with his part.
I wished I taped it.
The movie blew me away

I wish I had gone.