Video of Andrew Lau, LAST TYCOON on the big screen and GANGSTERS: a report from todays NYAFF 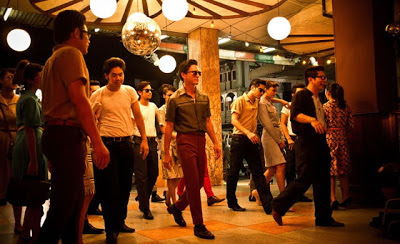 Its been a day and then some.

The chance to go to the Met game with the family had me bowing out of the screening of YOUNG AND DANGEROUS 1&2. Not to worry Chocko stepped in and covered the event. While we wait for a full report he has kindly posted the Q&A that occurred after the screening with director Andrew Lau. It can be found here and it runs about 26 minutes.

While the Q&A went down I was hustling to get from Citifield to Lincoln Center. In between movies I ran into Chocko and we talked about the movies and plans for the next couple of days. He also filled me in on the status of MrC and Earl who have been sidelined hopefully just temporarily

The first film I saw was LAST TYCOON on the big screen. Before the film Andrew Lau came out and spoke briefly about the making of the film and working with his mentor Wong Jing as producer instead of director, and he said it wasn't really that different. He also said that the only difference with Chow Yun Fat between now and when he did City on Fire with him is that Chow gets paid more.

The film itself was presented with gorgeous projection that impressed the hell out of me.  The film itself really is a masterpiece. While seeing it larger than life I found it more soapy, I did find that the film plays better when you know whats going to happen. You know the irony of the situations and actions become much more touching.  It also has several perfect sequences- the elevator, the rescue in the rain and a few others are absolute perfection.

Because the pre-film talk started late and went long the start time for GANGSTER was roughly 15 minutes later than it should have been. This would have been fine except that it meant that unless I LOVED the film I would have to bail before the end or else wait an extra hour in Penn Station and get home at 1230. GANGSTER had to be great or I had to go.

You know it's a hard choice to make when Grady Hendrix in his introduction to the film goes on about a film he loves but you've reviewed earlier in the day and trashed, right before saying that he was going to be in the back of the theater and didn't want to hear that anyone didn't like the film. Well I didn't say anything, but he did glare at me when I went out 25 minutes into the movie, primarily to go to the bathroom, but I saw the time and realized I could be home at a reasonable hour if I just went home.(Of course the fact that it's being released in the US by Manget made it easier to go)

GANGSTER is a Thai film about a bunch of guys who are gangsters in the late 1950's. The film is a mix of fiction and documentary interviews. Its an odd mix that didn't really work for me. Actually the mix of real, knowing fiction, great action, and computer generated blood never grabbed me.I could watch it but I wasn't moved by it because it all seemed make believe.

To be honest I have a mixed track record with Thai films, basically I love them or I loath them. When I love them, say COUNTDOWN which played earlier at the festival, I am rapturous about them. When I don't like them I find the intolerable. This is my own problems and doesn't mean anything.

Not digging it, as a friend of mine says frequently, I left and headed home, missing the crowds heading home from the fireworks.