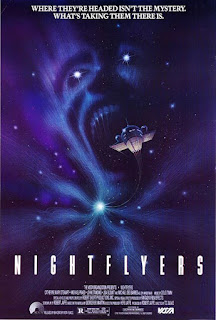 Okay B level science fiction/horror film is a decidedly 1980’s film in its look and feel. A minor film, even under the best of circumstances, Nightflyers is also a pretty good time passer that seems to have bits of it stolen by more recent films such as Prometheus.

The plot of the film has a bunch of characters brought together to try and track down an elusive force in the universe that remakes things as it passes. Once the ship takes off things begin to go wrong as the ship’s captain is found to be incommunicado and only appears as a hologram, and the ship seems to be trying to kill the passengers.

Far from the best film ever made the film survives thanks to some interesting twists and turns and some reasonably good action sequences.

The film’s final half, where the crew tries to survive the deranged ship’s efforts to kill them is pretty good. It was seeing this sequence that I reconnected with the film.  I had walked in on the film in the later half when it was being run by one of my family members. Plopping down on the couch as all hell was breaking loose I was amused by what I was seeing. To be certain it wasn’t the best action sequence ever, but the cast played it seriously enough that you could at least sympathize with their situation. While the action plays a bit more silly when you see it from the start, it still was pretty good when I later on watched the film from start to finish.

To be certain that the film is far from a classic film, but it is on another title to add to the growing list of films that are better than their reputation or oblivion seems to indicate. Worth trying should you run across it.
Posted by Steve Kopian at July 16, 2013