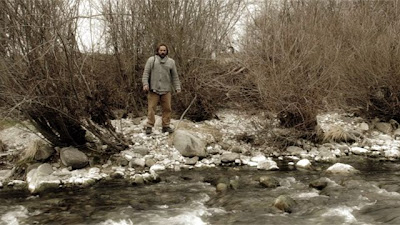 More tone poem than straight forward horror film ACROSS THE RIVER is a horror film with pretensions that manages to live up to them and generate genuine fright and a haunting sense of unease.

Nominally the story of a biologist setting camera traps and tracking wild animals in the forest, the story expands to include an old man remembering the past and a team of rescuers looking... I won't reveal how they all relate  I'll only say that I felt really uneasy when the story was done.

Paced with a style that many would call slow and with a very deliberate way of going about thing ACROSS THE RIVER is something we see very rarely these days a horror film of lyric almost literary quality. This is a film that works on you head as well as your emotions to create something special. This is a film of mood and emotion not grossness and gore.

I want you to rush out and see this when the film plays tomorrow at Fantasia because this is a film that will benefit from being seen on a big screen in the dark where there are no distractions (Honestly if I were able to be in Montreal tomorrow I would be at the screening). And as much as I do want you to see it I want you to take it on it's own terms. Know going in that the film is slow (its slowness is the films one flaw) but also understand that the pacing is such that its there to bring you into the story. We are being told the story this way because it will give us a better sense of being there.

I really like the film a great deal. An while on some level I may admire it more than I like it, I still found it haunted me well after I finished viewing it.