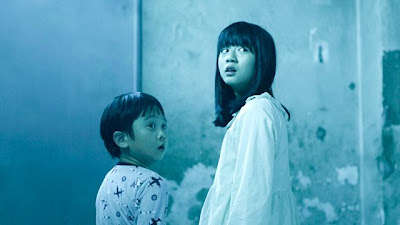 Anthology horror film begins when a girl kidnapped by a serial killer has to use stories to keep her kidnapper at bay. He wants scary stories, the scarier the better.
DON'T ANSWER THE DOOR concerns some kids home alone at night waiting for their mom. She told them don't let anyone in, then someone comes to the door
ENDLESS FLIGHT has a serial killer lose on a plane in flight
SECRET RECIPE is a twisted tale of what happens when a young woman is about to be married
AMBULANCE ON THE DEATH ZONE has what happens when an ambulance crew takes a patient,  infected with the zombie plague, to the hospital.

Good horror anthology suffers in that some of the stories wander around a bit too much.  Don't Answer the Door simply tries to take things too far by tying in every potential  little plot thread. Death Zone would have been better shorter or longer,the running time simply is the wrong one for this story. The best of the bunch is Endless Flight which fills it's 20 or so minute run time with just the right amount of scares.  This isn't to say the other films are bad, they aren't, it's just that Flight uses it short running time to full effect.

I like the film and when and if it becomes available in the US I will be picking it up for the collection. Probably the best thing I can say is that I'm already looking forward to the sequel...perhaps it will play next years Fantasia.
Posted by Steve Kopian at July 28, 2013