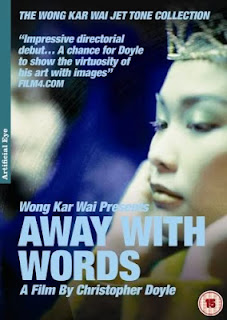 I have no idea if Away with Words is a good film or a bad film. I don’t think it’s even worth trying to figure out if it’s one way or the other, rather I think we should just except it as a singular work of cinema and a grand masterpiece.

And yes it’s pretentious as all hell but at the same time it’s frequently so deliriously wonderful that I can forgive it it’s short comings.

The plot of the film has something to do with Asano who has a sensory relationship with words and an iron trap memory going to Hong Kong and meeting Patrick Sherlock at a night club. Sherlock is the odd man who I believe owns the club who has memory problems unless he’s drunk and who talks a mile a minute. There are other characters who come and go but for the most part the film focuses on the two men, their memories, dreams and the ways they relate to language.

For a film that is often about words this is an incredibly visual film. Amazing image crashes into amazing image. The connection of them, especially when mixed with the flowing words creates an emotional landscape that is deeply affecting to both the head and the heart…though more in the heart, it’s more a film that I feel than one that I can really talk about. It’s a film where words of description fail. How can I explain how a series of images, some rapid fire makes you feel? How can I explain how the sequences work when the visceral impact of three or four images would take three or four pages of words to duplicate.

I love that Christopher Doyle has thrown everything into the film. It goes from looking amateurish to looking stunningly professional and back again and again and again. The shifting back and forth should kill the film but instead it creates this unmatched sense of life and living. In life we go through moments that are dumb and then we bounce into highly polished ones. Such is the case here. This film is a gloriously alive, even to the point that the characters are all playing fictional versions of themselves.

I don’t know what to say but if you can track the film down. Watch it with no preconceived notions and just let it and its images and ideas wash over you. Don’t take it as anything other than what it is at that moment…and I think you’ll come away really impressed.

Away with Words is a visual delight
Posted by Steve Kopian at July 17, 2013