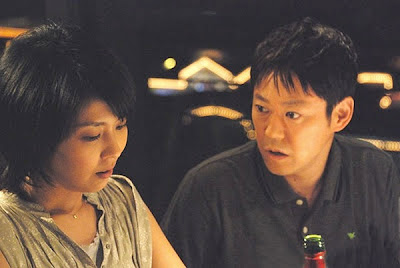 After their new restaurant burns down a couple's finances are in ruins. They try to put their lives back together, however all doesn't go well. They  begin working in other restaurants and he begins to drink heavily.  When drink and depression leads him into a one night stand his wife is at first angry, but then she sees his ability to pick up women as a solution to their problems. They'll get the money they need via marriage fraud. All goes well for a while but the lies begin to pile up and trouble is heading straight for them.

DREAMS FOR SALE is film that is a bit hard to describe. This is an odd mix of crime and drama that has a dash of humor sprinkled in. Yes I can tell you what happens but I really can't explain how the film feels, or what sort of a film it is. It doesn't feel like any conventional genre  and watching it I got the feeling it was trying to be something else entirely. Its not a crime film, its not wholly a drama... I mention this oddness of feeling because even taking the film head on and on its own terms I wasn't sure how to react to it.

I'd like to ask the director What exactly do you want me to feel? I mean we like the characters, we really do. And I'm talking about all the characters and not just  Satoko and Kanya ,our leads. We feel for them when they are taken advantage of, and yet at the same time we like the ones taking advantage of them. It's very strange to kind of be rooting for everyone all the time. Additionally there is something about the tone of the film that isn't as dark as I expected. I just don't know how to react to it.

I think part of the problem is the film is...well...oddly paced. We are barely introduced to the characters when the fire destroys their life. We are then driven forward into the story without a sense of who they were before. I mention this because without knowing what they were before I can't judge how Satoko's drinking nor Kanya's upbeat attitude reflects on their present situation.  The film then moves forward through the infidelity and the fraud with a leisurely pace that probably would work great on the page but is draggy on the screen. (Why is this film almost two and a half hours?)

I could niggle and pick the film apart but I really don't want to do so. Instead I'd like to say that the cast is great, especially Takako Matsu as Satoko and Sado Abe as Kanya. There is something about them and their chemistry that keeps you watching through the ups and downs of it all.

As  is my frequent refrain here at Unseen, it's not a bad movie, rather the one word I come up with in describing it to some friends was off-beat. I genuinely like the film and I'm planning on pulling out my DVD of the film down the road away from NYAFF and Japan Cuts and giving the film a go in a vacuum. If you're adventurous I suggest giving the film a shot when it plays tomorrow at the Japan Society. 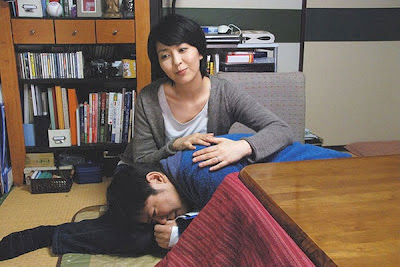