In Search of Dracula 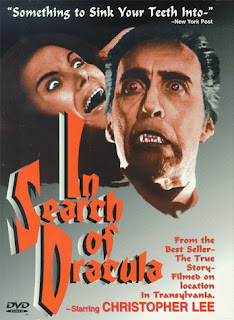 The sad thing is that with Christopher Lee narrating and the title sounding like the long running TV show most people seem to have dismissed In Search of Dracula as a dumb little horror film. The reality is that this is an amazing look at Dracula, Vlad Tepes, vampires and verious other legends. Yes the film came out at a time when Sun Classic films like In Search of Noah’s Ark and Beyond and Back were filling theaters, but this was and is so much better than those films- hell I have a shortened version that ran on PBS.

Okay yes this film has Lee traipsing around both Vlad The Impaler and as Dracula in recreation segments that speak of what might have been a stunning horror film had they gone that way, but the real meat of this documentary is a look at Bram Stoker’s Dracula and it’s roots in myth and legend.

The reason the film works is that the cinematography coupled with Christopher Lee’s serious reading of the narration gives everything a weight that most modern takes on the subject don’t have. Watch this film and then take a look at something similar on the History and it’s bright and airy and kind of vapid. Here it all plays real…and as I inferred at the top the film also plays like a horror film. To me that’s one of the great selling points of the film, that it gets under your skin and makes you wonder what is lurking in the shadows just out of sight.

Can you tell that I really like the film?

Track this bad boy down.

The film was recently released by Alpha home video on DVDR which is a reissue of the old Image edition.- it’s worth the five or so bucks it costs.
Posted by Steve Kopian at July 31, 2013