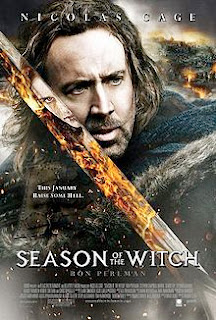 Much maligned film has a two crusading knights deserting when their mission calls for slaughtering a town of women and children. Back in Europe the pair is discovered to be deserters and locked up. When the Cardnial discovers who they are he offers them absolution in exchange for taking a "witch" to a distant monastary. They agree and soon they find that they are on a perilous journey.

I'm not sure what displeased critics and audiences when this opened two years ago, but for me this is just a throw back adventure film  with some black magic mixed in. I suspect the reason that people are not particularly happy with the film is that other than the opening and closing there are no big action sequences. I don't know where you'd put them, but I'm guessing the slowish journey bothered them.

The trip didn't bother me and I liked that the film wasn't a big booming film. I think that instead of huge action set pieces we got smaller set pieces that move the story and characters along. I like the kid challenging Pearlman, I also like the bridge crossing. I alike that we are never sure of what the deal is with the witch. I liked that we get a couple of likeable characters in Nick Cage and Ron Pearlman. To be certain, their too hell with the church I only go for god attitude would probably have gotten them killed as heretics, but it brings a much needed world weariness to everything.

High art? Oh hell no, but the perfect thing to watch while curling up on the couch on a Sunday afternoon (which is what I did the week after Tribeca ended)

Very much recommended
Posted by Steve Kopian at July 24, 2013