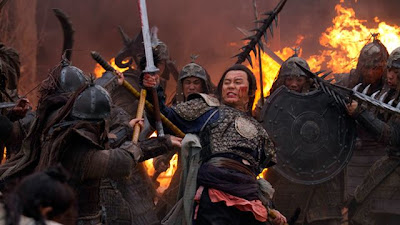 This is a review I had half finished, I have an import DVD and was going to review this in January at Chinese New Year (yes I work that far ahead some times), but since the film is playing Monday afternoon at Fantasia I've spruced it up and posted it.

Ronny Yu's SAVING GENERAL YANG is an okay retelling of  the story of the seven sons who follow their father into battle and then have to rescue him after he ends up behind enemy lines. Its chief assets are its large scale (and computer enhanced) battle scenes.

Ronny Yu is a director who is very hit or miss. Yes he did the classic BRIDE WITH WHITE HAIR and the very good FEARLESS with Jet Li but he also did the infamous WARRIORS OF VIRTUE about kangaroo warriors (and I won't get into his other American films like FREDDY VS JASON). Here he hits and misses depending upon which moment you're in. While the film is well acted and often spectacular to look at the film is weakened by two things.

First is the over use of computer images. Yes it allows for larger armies and bigger set pieces and some mind blowing images, but at the same time very little of it seems real.  During one battle scene we watch as fake armies fall off a fake cliff. In another digital rocks crash into a compound while the wounded are treated and in a third fake fire goes no where near the army it is supposed to be consuming.

The other more telling problem is there is simply too much going on for a 100 minute movie. The brothers are reduced to being first brother or sixth brother. They don't really have names. Additionally some events are told in short hand. The romance that partly sets events in motion is breezed through. I kept feeling that there was more I should know.

On the other hand  I don't the film exists for the story, I think the film exists for no other reason than it's action sequences and in that realm the film scores huge points. Computer enhancements or not the battle images are incredible and it's easy to understand why so many of them mare used in the trailer. This is film is absolutely worth seeing on a big screen  because I think the bigger the image the better the film will play since you'll care less about the merely adequate script.

Worth a look at Fantasia, otherwise whether you see it should be determined by your love of sword play and the damage it does.
Posted by Steve Kopian at July 28, 2013