Two shorts at Fantasia: DECELERATORS and MY PAIN IS WORSE THAN YOUR PAIN

Reviews of two short films playing at Fantasia this year 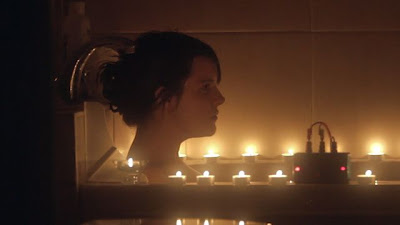 DECELERATORS
Mark Slutsky's five minute short film is one of the best science fiction films I've ever seen. It's also easily one of the great films of the year.In its brief time span it manages to say more about the human condition and life than almost any other or every other film I've seen. The story concerns people wanting to slow time down. I'll leave it there, except to say I really really want to discuss the implications but its unfair to do so because it's so short I don't want to spoil anything.  Track this one down or go see it when it plays with See You Tomorrow Everyone at Fantasia.

MY PAIN IS WORSE THAN YOUR PAIN
Adam Hall adapted TC Boyle's short story about a middle aged man obsessed with a neighbor. It's an obession sends him down a lonely path. Its a small scale gem of a film that captures the mood and feeling of Boyle's writing - though thanks to the scoring the film is  bit more brooding than Boyle's prose. Its beatifully shot and acted and is currently up on the Harper's website along with the short story and is worth a look (It comes down in September).
Posted by Steve Kopian at July 28, 2013