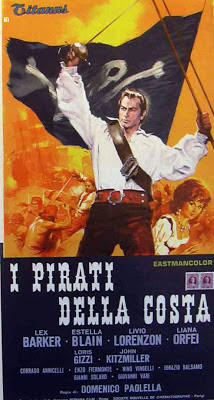 Lex Barker stars as a Spanish naval commander Luis Monterey who is arrested and thrown on to a prison ship after pirates seize a ship full of silver he is transporting to Spain. Where the film goes from there is what makes it interesting.

Putting the film on to pass the time during a bout of the flu I was drifting in and out for much of the first 20 minutes as the film went through the typical piratical waters. Then, once Barker is sent off to prison the film suddenly leaps to life as Barker doesn't take the typical course you'd expect, all I say is he becomes a real pirate and leave it at that.

A huge spectacle of the sort they don't make any more this is a neat little film that I suspect the vast majority of you have never heard of. I know the only reason I had any notion of the film existing was because Sinister Cinema put it out on DVD. This is truly one of the films that Unseen Films was started to highlight, neat little films that have fallen off the radar.

Search this one out-it's on DVD from Sinister Cinema and streaming from Amazon
Posted by Steve Kopian at July 27, 2013