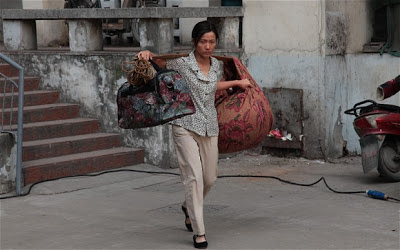 Moving into a new more impressive apartment a couple finds their lives unraveling....

He works in a factory. She works in store in a shopping mall. They have saved enough money to afford a better apartment and continue their upward climb. But all is not right with the world. She is demanding and borders on shrewish. He wants a divorce, she wants him to stay. We follow as their lives as things spiral out of control , the result of picking a place to live with poor Feng Shui.

The legend of the film is kind of better than the film itself. Last year the film was due to play at the Tokyo Film Festival.  The trouble was that Japan and China got into a tiff and the Chinese government asked the production company to withdraw the film. The Japanese refused to do so and showed the film anyway stating that they had not used the proper means to withdraw the film. The result was a legend the film probably can't live up to.

The short version of the story is the film is a heartfelt and wrenching drama about the quest for wealth and status and what can happen. Its one of the fine mannered dramas that the Chinese do extremely well and which go almost always ignore by the West (Thank you NYAFF for showing the film).

Now the trick with the film is going to be whether you feel anything other than dislike for Li Baoli played byYang Bingyan. If you can get past her demanding high strung nature, something is on view from the instant we see her as she bullies her husband and the movers, then this will most likely be one of the best films you'll see this year. If you can't this is going to be a tough slog since you'll be wondering why someone doesn't throw her out a window or simply walk away.

I had a real tough time with her and while I can readily admit that this is a great film on most levels, I simply didn't like it and I  never want to see the film again because I don't like the lead character.

If you saw the film at yesterday's screening please feel free to leave a comment I'd love to know what you think.
Posted by Steve Kopian at July 04, 2013