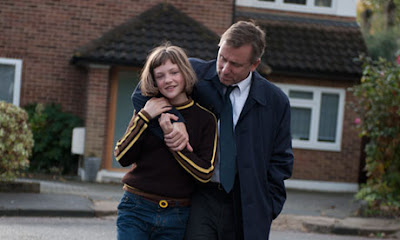 An apology of sorts to the makers of Broken.

When I sat down to screen your film it came at the end of a long run of similar British dramas all financed in the same way (BBC/National Lottery/BFI). For whatever reason it was during the run of the film it occurred to me that as good as the film was it was ultimately interchangeable with any number of other films I’ve seen not only over the last few months, but the last few years. To my mind despite all the films having different plots, you could pretty much slip characters and sequences in and out any one of them and have them play pretty much without a bump. Yes, you’d be tripped up by the specifics of plot, but mostly all of the films could be forged together into one giant British drama. While watching Broken it suddenly became very clear that despite whatever pros (great cast great characters) and cons (too many echoes of To Kill a Mockingbird) the film had on its own terms it was rapidly being lost in to the clump of like similar dramas.

Taken on its own terms Broken, which concerns a young diabetic girl dealing with a boyfriend, crazy neighbors, a beloved teacher dating her au pair, her friends and her dad, is a good film. It has a great cast featuring Tim Roth, Cillian Murphy, Rory Kinear and Eloise Laurence as our heroine, Skunk. The characters live and breathe and make the film worth the price of admission. Of course the film has its flaws, sameness aside, the chief of which is that it seems to have been cribbed partly from To Kill a Mockingbird, with a Skunk looking like scout from the movie, a crazy neighbor (who is dangerous this time) and a rock solid father.

The problem is that I can’t take it on its own terms. To me the film is yet another in a long line of British domestic films all set in the same sort of town, all in homes that look the same all involving people who look alike. This isn’t the case of all British films of course, rather it seems that it’s the result of the films that all, or a large portion of those reaching US shores, seem to be produced by BBC/National Lottery /BFI.
I realized there was a problem when I saw the three names and groaned “oh Christ no” out loud. Clearly it meant something subconsciously. Then after about ten minutes into the film I realized that my attention was drifting. Not because it was bad, rather because it didn’t stand out. It looked like I was seeing something I had seen before even though I had never seen it before. (I was going to include a list of similar films but realized that I haven't been noting them because the whole lot are rather bland and haven't been worth mentioning here or anywhere else)


I stayed on to the end but the film never clicked with me.

Broken isn’t a bad film, its just an unremarkable one, especially if you have seen a large number of recent BBC/National Lottery/BFI films.
Posted by Steve Kopian at July 19, 2013