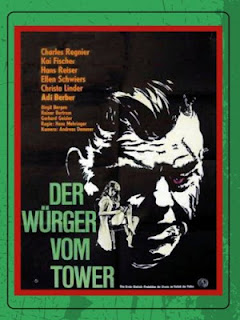 This film makes no sense what so ever and in this case it's a good thing since it makes for a film that keeps you watching all the way to the end.  The film begins when a wealthy woman is murdered and Scotland realize that a killer they call the Strangler of the Tower has returned. As with the earlier murders the killer has taken a jeweled necklace. In the process of investigating the murder the police discover that the missing necklace is made from the legendary Parvati emerald which had been cut apart and made into several cursed pieces of jewelry.  As the investigation continues more and more bodies, all seemingly connected to the cursed gems begin to turn up. From there gets weird with strippers, whippings, kidnappings, a masked brotherhood and assorted other strangeness.

Shot in a moody black in white in style that nails the Edgar Wallace series that were all the rage in Germany the film was actually written by Erwin Dietrich who would go onto write films such as Wanda the Wicked Warden which some consider part of the infamous Ilsa series. The film is a grand old mystery about various not so nice people doing terrible things to each other in a truly pulp fiction way- and it's a blast. I mean would anyone take a bunch of hooded baddies seriously any more or even in 1966? Of course not which makes the film wonderfully quaint.

The films flaw is that it makes no sense. I'd love to blame it on the dubbing but seriously this film makes no sense since it's never clear why anyone is doing anything, and even when it is you usually go WTF. I love this film a great deal simply because it's so out there that one can't help but simply go with it.