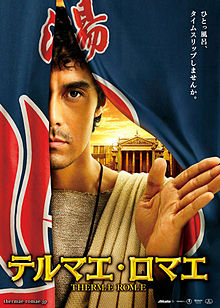 Lucius is an architect in ancient Rome who is having creativity problems. When an important project comes through a friend takes him to a bath house to help him relax and focus. Sitting and contemplating he suddenly finds himself sucked through time only to appear in modern Japan where he finds the solution to his problem. He is then whisked back to his own time...soon he is traveling back and forth between Rome and Japan, which is where he meets Mami, a young woman who wants to be a manga artist...

Hiroshi Abe stars as Lucius and he's wonderful. I suspect he got the role in large part because he doesn't look wholly Japanese and can pass for a European. At the same time I suspect that he got the role because he's a damn fine actor.  Abe wanders through the film with a great combination of bewilderment and assuredness. His big frame makes him an imposing figure both in Japan and Rome. That the film works as well as it does is due in large part to his casting, as well as Aya Ueto as Mami. Ueto manages to be utterly charming and a perfect match for Abe.

As much as I like the film,(and I'm very passionate about the film) I find that I'm disappointed that I don't love it as much as I really should. Its no fault of anyone except the writer who has scripted a much too episodic story at the start. I know the film is based on a manga  where things can be episodic, but with in the frame work of a film it becomes a bit tiring. I wouldn't have minded some flipping back and forth to lay out the ground rules and characters, but the film flip flops in episodes for an hour before the film settles down as Mami makes the trip back to Rome with Abe (no that is not a spoiler watch the trailers). By the time its on one track I was ready to turn off my import DVD and go on to something else for a bit. Thankfully I didn't but I wanted to.

Now, don't get me wrong, there is nothing wrong with the film, its a damn charming film it's simply that it took a while for me to completely give myself over to it. Hell I've been talking the film up big time since I saw it and my enthusiasm for the film has made several people pick up tickets for its weekend screening at the Japan Society. In all seriousness this is definitely worth your time and you should go see it when it plays this weekend. I'm sure you'll ultimately love the film and be like me, waiting for the sequel which is due for release next year.
Posted by Steve Kopian at July 11, 2013