Four films, most of the on dark subjects made for a long day at the New York Asian Film Festival. Thankfully I had good company during the day- Hubert from Flixist was there all the way through., Jared from Bullets over Broadway was there for everything but the romantic comedy, Alec from Flixist popped in for NEVER TOO LATE TO REPENT and Mr C made a surprise visit for that film as well. I also got a few words in with Earl who is on injured reserve, Chocko who was coming for the late movie, and Joel, who's changed facial hair had me unsure I was seeing the right man.

The day opened with one of the Subway Cinema guys using cue cards for the audience because he was too hungover to do the introduction. It was one of the best intros I've seen at a NYAFF and it makes it clear that Grady may have a challenger for his best movie host spot.

The first film up was Hou Chi-jan's TAIWAN BLACK MOVIES.  I'm going to do a longer write up with it and the two Black Films that ran with it later, but for now you should know that the film is a vital piece of film on film reporting. Its a brief look at the movement that ultimately changed movie history. While not a perfect film, it's the sort of film that I know I need to see again simply because there is too much material to absorb. And then after seeing the two features you need to see it again because it puts the documentary into context.

The short version of the story is that in 1979 with the release of NEVER TO LATE TO REPENT  Taiwan began to turn out a series of "social" issue films about the dark side. Touching on gangster, prostitutes and other people in the shadows the films showed a violent side of life that shook up Taiwan cinema. The films showed blood and nudity in ways the industry had never done been before. The cycle ran full speed until about 1983 when the cycle ran out of steam and the government put a stop to some of it. (and thus New Taiwan Cinema was born)

After the film Hou Chi Jan did a brief Q&A before being shuttled off to join a press conference on Taiwan film that was going on at the same time. I was supposed to cdover the conference but I wanted to hear the director speak on this film and  I also had to update my notes which were a mess. (I do want to thank Jared for filling in little details for me before and after the film.)

The two main bits that I took away from the Q&A was first that Hou Chi-jai thinks that the cycle was separate and apart from the Hong Kong New Wave which was starting about the same time. Second was that for the most part no one really remembers the films or has any affinity for the surviving ones in Taiwan, they are much more interested in the romantic films from the early 1960's.

The Next film was WOMAN REVENGER by Tsai Yang-Ming. This mean little film is about a woman who travels to Japan to find out what happened to her friend who got mixed up with prostitution and the Yakuza. She also wants to rescue her friend's sister from a similar life. The bulk of the film is a search for missing heroin and the revenge inflicted upon the yakuza goons for their misdeeds. Its a solid over the top film who's only real flaw is an extended sequence at a street happening that goes on for what seems like an hour. (I'll have more in the review in a day or so)

During the Q&A Hou Chi-jan joined Tsai Yang -Ming, however he didn't get a word in edgewise as the older director talked at length about how the film was based on events that  resulted when young girls went to Japan on their own, how he had to use the Yakuza to be able to film in Japan and how the law always gets you in the end ending (which feels tacked on ) was put in place by the censors.

WHEN A WOLF FALLS IN LOVE WITH A SHEEP is Hou Chi-jan's romantic comedy about a young man looking for his runaway girlfriend a street full of cram schools, and the quirky young lady he meets there. Its a charming  well made film that will either click with you, in which case you'll love it; or it won't click and it will end up seeming rather twee (thank you for the word Kenji). I need a full review to really discuss the film but for now know that I like the film, I love parts but I find much of it twee and overly artificial. Its too calculated. That said the ladies on the line before an Inaccurate Memoir LOVED it. 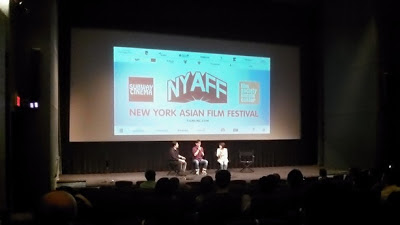 During the Q&A  the director said that the film perhaps connects to the Black Films  documentary in that it both focus on things believed to be lost (Lost loved ones and lost films). He joked that he had made this film to confuse the people who knew him from the Black Film Documentary.  He spent some time explaining how the level of quirkiness and animation was determined by the mental state of the characters. What we see is how they see the world. As for the film being autobiographical, he said he did go to one of  the schools near where the film is set and he did meet some of the characters (print shop owner, noodle guy, ect) who have real counterparts but there was no romance for him.

My final film of the day was preceded by the giving of the Life Time Achievement Award to Tsai Yang-Ming. Considering that the next film screening, NEVER TOO LATE TO REPENT changed film as we know it since the genre it spawned influenced everything that followed it around the world in one way or another, it was a well deserved award.

I need to state that the print of NEVER TOO LATE... was preserved thanks to funding provided by Subway Cinema. I also want to state that it was the source of a blooper on the part of the organizers who neglected to tell us that what were were seeing is a composite of two surviving prints, one that had a viewable image and the other had a mostly complete soundtrack.  The mostly complete part is important because until Rick Meyers went out to inquire about the soundtrack constantly disappearing we never knew that was going to happen through out the film.

The film it self is based on the leading man's life story. Growing up in a broken home, he killed a man at 18 and went to prison and then had to fight to put his life back together. Its a nasty violent film (with some now unintentional humor) and I completely understand how it spawned a genre. 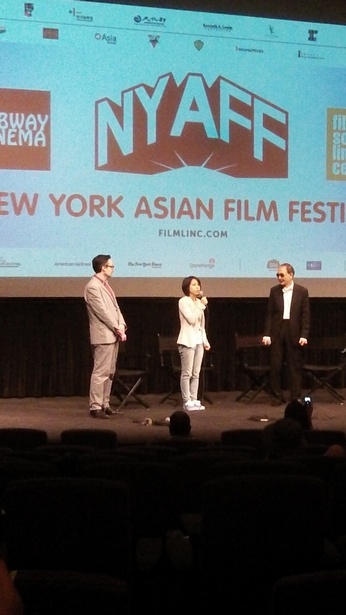 After the film the director came out and did a quick ten or fifteen minute Q&A. He again talked about it being made with the help of gangsters and the realism (its all real locations).  The Q&A was also the place for one of the most bizarre moments I've ever had at a film festival as a tall man in blue stood up and proceeded to ask about where the film was made, if there was a sequel and a few other things that made it appear as if he had staggered in off the street into a random theater with no idea what was playing 20 minutes into the movie. I applaud Goran for handling the man's off base questions with grace.

After the film I and Hubert headed to are respective homes, while Mr C, Jared and Alec stayed for HARDCORE COMEDY (Mr C tweeted: :it was silly, stupid, & funny. Lots of eye-candy & three short films w/ one common denom scene. Cursing & lotta canto-slang.)

I'll be reviewing all of the days films in the next couple of days, but for now you have an idea of what happened.
Posted by Steve Kopian at July 07, 2013