In Brief: Good and Bad films at the Fantasia Film Festival (RITUAL:A PSYCHOMAGIC STORY and KEY OF LIFE)

Wading through the films at a film festival sometimes films don't make much of an impression, sometimes they do but fall by the wayside and sometimes you find that you just don't have a whole hell of a lot to say.  The pair of films I'm going to briefly mention here kind of fell by the wayside and in one case (RITUAL) I don't have a great deal to say. I seriously considered not reviewing the films  and simply moving on to other films but I feel that Unseen Films is a kind of place of record so I want at least say something so there is a record. 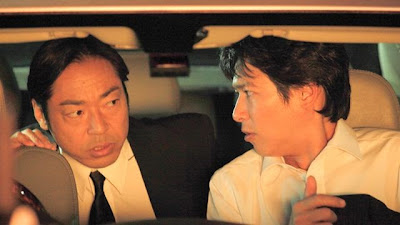 KEY OF LIFE from Kenji Uchida deserved a hell of a lot more than I could give it. A wonderful mix of genres (romance,black comedy, gangster, amnesia...) the film follows what happens when a loser goes to a bath house after failing yet again to kill himself. Through circumstances he switches locker keys with the hit man who has slipped on a bar of soap he accidentally dropped and has ended up in the hospital... Wonderfully not what you expect even when you expect something that isn't what you expect.

I saw this film late at night and was much too tired to fully accept the joys of the film. Watching the film I was having a a really good time but at the same time I was well aware that if it wasn't as late as it was I would have enjoyed the film sooo much more than I did... I wasn't going to review the film because I didn't think I could give the film a fair shake but the the next morning I found I was trying to find the film on DVD because I had the over riding desire to see it again with friends.  In my book that's a high recommendation.  The film has finished it's run at Fantasia but I'm hopeful it will be available to anyone who is reading this soon. 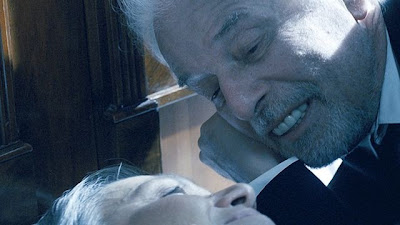 RITUAL:A PSYCHOMAGIC STORY is a good looking pile artistic pretention. A 90 minute TV commercial like film it hits every god damn pretentious mark with a fervor that makes me wonder if the directors were putting one over on their audience.

The story of Lia who is in a bad marriage with Viktor who controls her every move. She mentally breaks when he demands she have an abortion to the point eventually ends up in the village where her aunt lives. Its a mystical film with its own logic.

Actually it's just a mess as sequence after sequence made me think I was watching either a perfume or margarine commercial (say what you will the film looks great). I can't tell you how many times I was babbling "Really? Really?" out loud. Billed in the Fantasia summary as a precursor to the return of Alejandro Jodorowsky's own film later in the year because the director is in the film and the film is based in part on some of his psychomagic musings,  the film is a pale shadow of what Jodorowsky would have done with the material.

This is a a perfect example of what is wrong with art film and what happens when people try and ape the style and musings of a director greater than themselves.

One of the least necessary and most disposable films of the year.
Posted by Steve Kopian at July 31, 2013