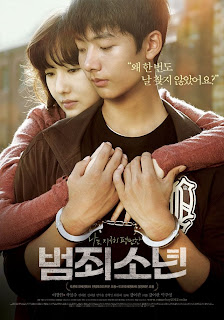 Could you please forgive me this one time? -Ji-gu the title character

The above line is a refrain uttered several times by the main character in Kang Yi-kwan's Juvenile Offender. Ji-gu is a more or less good kid who is being raised by his sick grandfather. His father is long gone and his mother ran out on him after giving birth at age 17. All he has is his grandfather who is too ill to keep an eye on him. After getting arrested yet again (this is the first time we hear the sad plea for forgiveness) he is sent to a reformatory. While he's away his grandfather passes and through circumstances is reunited with his mother. The problem is as loving as she is, it's also clear that it's a case of like mother like son and things begin to crack.

Powerful film of the sort that Korea seems to have strangle hold on. No one it seems is doing dramas this heavy, this involving and this good anywhere else in the world with any regularity. For what ever reason the Korean film industry seems to have cornered the domestic drama.

As with most films the cast is impressive and it's not hard to understand why the film has won as many acting awards as it has. Seo Young-joo as Ji-gu is amazing. While he seems to only have one brooding expression, it's clear that this is a kid in pain, several levels beyond what we consider emotional suffering. Lee Jung-hyun as his mom is equally good. Certainly she is more bubbly than her son, but it's clear the pain runs just as deep.

Blessed with an excellent script the film not shows the the domestic situations of our characters but gives us a clear glimpse into the world that locks the kids away. Not only are the courts are uncaring but society at large doesn't know how to react to kid with a troubled past. Its a sad tale with very little light.

As a rule I'm not the sort of person who will charge out and see a film like this. As a rule I tend to shy away from the darkness of real life, however when someone I trust recommends or a film festival such as NYAFF programs a film like this I'm all in.

This is a heartbreaking film that is worth the time and effort to see,
Posted by Steve Kopian at July 06, 2013