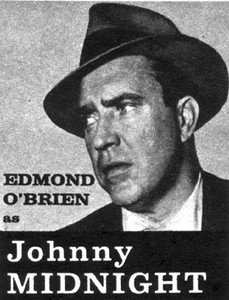 I’m the Law stars George Raft a Lieutenant Kirby. Forever dressed in a trench coat wades into various mysteries like a possible murder on the docks, a shop lifting ring or a the murder of an extremely disliked man.

Kirby is played in a manner that’s akin to Joe Friday on Dragnet, but with a tad more emotion and with a bit more street smarts. Kirby isn’t a stick in the mud but he is methodical and has a dogged stick-to-itness. Raft is so good at playing the tough guy that you know he’s in control from the instant he steps into the frame. HE’s the sort of a guy that crooks thing they are putting something over on, but in reality, he’s way ahead of them. He’s been around the block enough to know.

What I like most about the show was that in the 8 episodes (of the 27 made) the mysteries or investigations were finely crafted to actually work with in the 25 minutes of each episode. So many times the half hour crime shows feel rushed with the solution feeling rushed. Here the stories seem to be perfectly self-contained.

Johnny Midnight has Edmund O’Brien as a an actor who turned private eye. Working out of his families theater, the Helen Hayes doubling as the Midnight Theater, O’Brien takes on cases that either are tied to theater people or allow him to use his acting skills to solve.

Less tight than I’m the Law, the series still has some really good mysteries such as the first episode I saw where Midnight has to solve the murder of the woman he loves.

O’Brien and the writing are good, but one kind of wishes that the episodes ran an hour so they really had room to go into more.

On the plus side the film was clearly made in New York and the show is full of street scenes that show times square and the theater district back in the day.

Quibbling aside, I do wish the show ould get an official release so I could see all of the episodes not just the four I have.
Posted by Steve Kopian at July 29, 2013