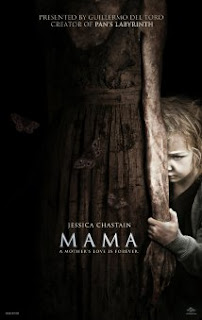 Mama is a creepy little horror film that came and went to some acclaim in theaters.

The film begins with a father carrying off his two daughters in some form of custody fight they. They stumble in to a deserted house in the woods where something lives…

Several years later the fathers brother is still trying to locate the girls. Eventually his trackers find the house and the girls, but all is not right, the girls are very feral- and there is no sign of how they survived for so long on their own. After months of treatment the Uncle and his girlfriend win custody of the girls and all is okay for a while until weird things start happening and it looks like the mysterious Mama has come with the girls.

Dark brooding film had a game cast and style to burn. Managing to be genuinely creepy the film earns its scares and doesn’t simply use shock cuts or loud music to scare you. Things build and small details within frames hint at greater horror. Sometimes chills are created when something just moves the wrong way… At a time when most low budget horror films either look good but have no script or are complete messes Mama comes as a wonderful change of pace. Here’s a horror film that cares about its characters and wants to tell a good story.

Heading the cast is recent Hollywood darling Jessica Chastain as the girlfriend of the girl’s uncle. Tattooed and with short black hair she looks nothing like the red haired cypher she played in Zero Dark Thirty. I know she won numerous awards for that film, but for my money the real performance is here where she seems completely different than in any other film previously.

I really like the film a great deal, and if the film gets a little lost in the last half hour I’m okay with it since when the film ended it left me feeling rather uneasy and somewhat disturbed.

One of the better recent small scale horror films.