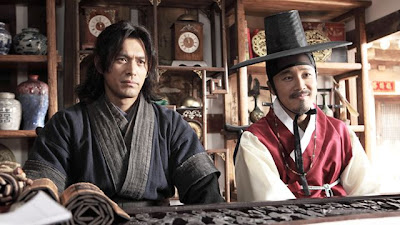 A literal ice heist...well... its an Ocean's 11 style heist film set in the Joseon-era that has a bookseller getting a band of con men and crooks together in order to steal the most precious commodity in Korea, ice.

Utterly enjoyable romp brought a huge smile to my face and an over riding desire to get the film on DVD so that I can watch it again with my dad.  This film is a real blast that's full of wonderful characters, great set pieces and enough twists to keep you guessing all the way to the end.

While I've been writing up short reviews for the films at Fantasia either in order to be timely or because I don't have a great deal to say, I'm keeping the review for The Grand Heist brief because I don't want to spoil anything for you. Yes its a caper film of the sort we expect nowadays  from Hollywood and elsewhere (heck, I reviewed the English caper film Wasteland earlier this evening) so you know how some of this is going to go-you know there are going to be twists- but at the same time I don't want to spoil the details for you. Yes I know whats the point of reviewing a film if you don't talk about the film, well my attitude is that I shouldn't have to tell you a great deal about some films, just say if its good or bad, and then hope that my enthusiasm carries over.

While the single screening for the film at Fantasia is done I do hope this film travels. I hope it shows up on DVD or netflix or better yet in a movie house near you...or near me cause I want to see this film again.
Posted by Steve Kopian at July 25, 2013