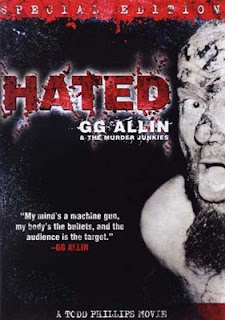 Long before big blockbuster comedies such as Old School & The Hangover trilogy, Director Todd Phillips was just a lone, inspiring film maker at NYU. He dropped out of school to focus on finishing his first full length feature. A documentary on the ever so controversial, underground punk-rock 'icon' GG Allin.


Hated: GG Allin & The Murder Junkies is a look behind a man whose music & life put all other so called "shock" acts to shame. There is no brief way to describe GG Allin, to those that may not be familiar with his work. To call his live shows and music violent, would be an understatement. Allin would often fight members of his audience, men & women, mind you these are people who paid to see him. He also often bragged about plans of killing himself on stage, though that never came to fruition. While performing most of his concerts in complete nakedness, Allin would switch between defecating on stage & self mutilation. Either with a microphone he once used to smash out his front teeth or broken glass. Most shows only lasted around 15 minutes or so, and ended in either a brawl or Allin being arrested. You get the feeling that if you walked into a club to see GG Allin, you were stepping into a war zone. No one was safe.


Phillips follows Allin & his band, The Murder Junkies through their short lived 1991 U.S. tour. There is no lack of footage here, between public appearances on Geraldo, spoken-word outlets (which always ended badly), and of course the guerilla style film making of his live performances. You will be disgusted at what you see, and that is exactly what GG Allin set out to do.


Several short interviews with Allin, his band mates (which include his brother Merle), ex-members & fans, intertwine between the raw footage shown. You never really get into Allin's past, it's laid out in a very subtle way. But that was never the point of the film. Hated: GG Allin & The Murder Junkies gives new meaning to the term 'sex, drugs and rock & roll'...just mix that with blood, urine, profanity & violence.


As it's mentioned after the closing credits, Allin died of a heroin overdose just a few months after filming wrapped on the documentary. He was only 36 years old.


There are a few different versions of the DVD available. I happen to have an older release, which includes footage of Allin's last show. A former gas station turned hole-in-the-wall venue, ends in an upscale riot on the streets of NYC. This footage is the last ever seen of Allin, who died just mere hours after. A 2007 version of the film, features different sets of commentary, one by Todd Phillips himself. An interview with Allin's mother, and a reproduction poster drawn by one of Allin's closest friends, serial killer John Wayne Gacy. What a colorful guy.
Posted by Robert Grimes at July 15, 2013