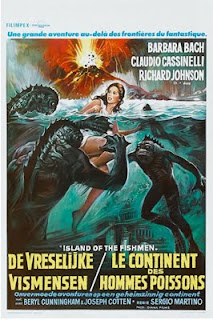 One of the American versions of this film called Screamers was billed with the tag line You will see a man turn inside out. For my money that’s a really cool way to advertise a film, and made me want to see the film asap.

The reality was something else, with Joseph Cotton acting as a Dr Moreau like character turning men into amphibians. He hopes to be able to help people by making it possible to tap into the oceans. The man Cotton is working for wants to use the mutants for his own ends.We see weird things but no one turns inside out- at least in the original cut of the film.

I have no idea what it all means since I don’t think the film makes any real sense. It’s a period tale with lots of underwater fish men running amok on a way off island. With an all star cast (I use the term loosely) acting (I use the term loosely) in an Italian financed film. It’s a great deal of fun if you are into these sort of things, which I am.

Actually I shouldn’t be so snarky since I really like this film a great deal. It’s a creaky gory monster movie that I like to put on now and again at 4 in the morning and I can’t sleep. It’s a film filled with nostalgia for me, not so much the film itself, rather in that it’s the sort of movie that I grew up watching and which they don’t make any more…basically it’s a mad scientist film on the order of the Blood Island films, which instantly puts it into a warm place in my heart..

When the film played in the US there a good number  snips made and a new opening was shot with Cameron Mitchell and a bunch people ship wrecked on a cave on an island. They are massacred by a bunch of monster men who break into the their cave. It has nothing to do with the rest of the film, but it was an even gorier way to start the film with heads ripped off...and it had scenes of the man turning inside out. (those scenes are not on DVD unless you have the VHS of Screamers)

Yes it’s my kind of base fun.

Weirdly several years…er fifteen years later they made an atrocious sequel called The Fishmen and Their Queen. The original plan was to get a copy of that film and then review the pair together, but Queen is beyond bad. Its one of those awful films that tries even the patience of bad movie lovers. I think my reaction while watching it was repeatedly screaming my eyes my eyes what have done with my eyes. Which is not the reaction you want from your audience.