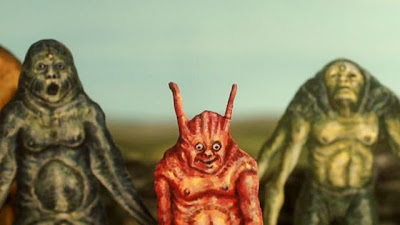 I had always heard that Fantasia was the place to see mind altering strange films and now that I’ve seen Burning Buddha Man I can honestly quote the words of Madeline Kahn  in Blazing Saddles“it’s true! it’s true!”

A truly one of a kind film Burning Buddha Man is going to strike many as animated when in fact it’s really a puppet film since it was created by moving cut outs live in front of the camera. There is no animation other than the moving figures. It’s kind of like the 1960’s Marvel Comics cartoons, but with depth.

Sandwiched between two brief sequences of a young woman sitting at a table with the sets before her, is the story of a young woman whose parents are killed when a group of thieves steal the Buddha from their temple. Set on the path of vengeance the woman soon is mixed up with the cult as well as various mythical creatures. Where the film goes is infinitely darker and stranger and weirder than I thought possible (And I'm thankful for it).

With a visual style that reminded me of Junji Ito ( creator of Tomie,Gyo) as well as other horror manga artists, not to mention the work of René Laloux who did Fantastic Planet (aka La Planète sauvage), the film is kind of a trip into hell as all of the characters, human and non-human take on a garish frightening look. Emotion is heightened and everything seems sinister. It’s an un-nerving and a pleasantly unpleasant experience as the look and style of the film puts we viewers into a completely new emotional territory. If we go to monster movies to see and feel terrible things while remaining completely safe this is a film that makes you feel things in spades, rarely has any film ever made me feel this much dread or unease.

Watching the film I was at first put off by the cut out style, but that then switched to admiration as I became aware of the amount of work requires. That was then replaced by completely falling into the film and being carried along. This truly is a film where the power of sound and image creates a true living dream.

A true gem,  this is a must see film. While it isn’t perfect, I doubt you’ve ever seen anything quite like this and for that reason as well as it being a kick ass film you really should see this. 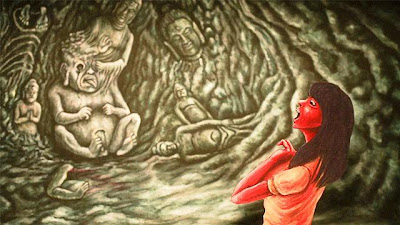