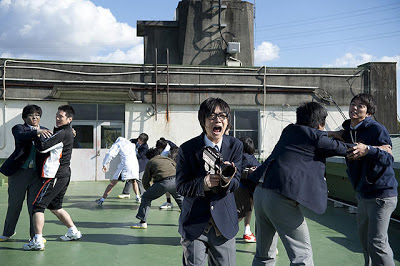 One day Kirishima, big man on campus, quits the volleyball team and walks away from school. His absence sends those around him and much of the school into a chaos.

Award winning Best Picture at the resent  Japanese Oscars is an existential examination of life society and the classes we put ourselves in and are forced upon us. Kirishima, like Godot, is never seen but his presence and importance is felt through out the film. Some people are forced to change their position in life, others no longer no how to define themselves and others just don't care.

Not a film for those looking for wild action or blood curdling horror (I mention this because it is screening as part of the NYAFF and Japan Cuts both of which frequently program wild films) this is instead a quiet thought look at the life of students and society at large.

A good solid film, it didn't completely click with me. Part of it is I suspect that some of the angst of Japanese school life simply didn't click with me. Part of is it is I'm several years past high school and I see some of the things that the kids are worrying about are ultimately hollow (okay yes, isn't most of all our lives equally hollow about different things? But I digress). And I think part of it is that the film is slightly too mannered for me. The film is clearly striving to be about something greater and at times it seems to force the point.

As I said this is a good film, worth seeing if you want something quietly thoughtful. Personally I liked it but I not much more than that.
Posted by Steve Kopian at July 10, 2013