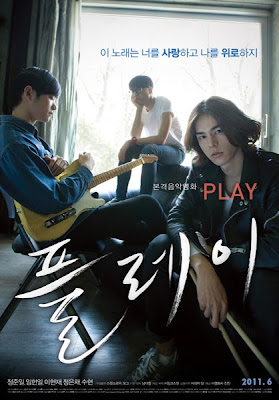 I'm buried with NYAFF and Japan Cuts but I want to take a couple of seconds to say that the next series of Korean Cultural Service FREE films, all having to do with music, begins Tuesday with PLAY. Here's what the website says:

Mate was an indie band from Korea who happened upon fame in 2009, when Irish musician Glenn Hansard (of Swell Season and the hit musical “Once”) spotted them busking in the lobby of one of his concerts. This was the beginning of a dramatic debut, which would see bandmembers Jung Joon-Il, Yim Hun-Il, and Lee Hyun-jae rocketed to fame. Play chronicles these events, with the band appearing as themselves – and staying very truthful to their inspiring story.