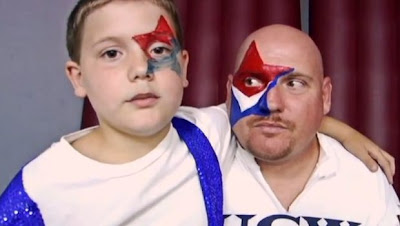 This gem of a film is about a bunch of guys who travel around the south trying to spread the word of Jesus through professional wrestling. Yes, I know it sounds silly, but it’s not. It’s a great portrait of a bunch of guys trying to spread the word of God through something that they like to do. But it's not about the word of God, it's about the guys and their families. The film neither preaches to you, nor does it make fun of its subjects. Rather it’s a loving portrait of a bunch of great guys you'd actually want to hang with.

We at Unseen Films really loved the film a great deal  which is clear since we ran several pieces on the film:

Mondo had a very long talk with the directors which he cut down to a manageable length. It can be found here (the unedited version is at Mondo’s Violent Eye Report)

And then Mr C chimed in with his own thoughts.

This is a special film that needs to find a wider audience.

For full details on the Kickstarter and to donate go here.

And yes I did kick in some money myself (I'm getting a t-shirt when the film is done)- so please donate - I want my t-shirt.
Posted by Steve Kopian at July 24, 2013