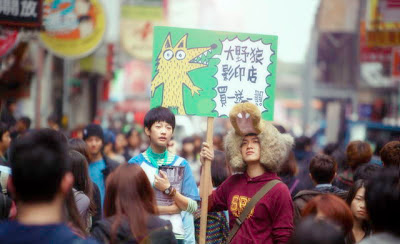 Waking up with a sticky note on a his forehead saying that his girlfriend had gone off to cram school, our hero, waits patiently by the phone until he’s thrown out of his apartment. Chasing after her to Nanyang street where all the cram schools are, he takes a job at a photocopy shop in the hope of running into her. Instead of his girlfriend he begins to meet the various people living on the street and working in the cram schools, including one quirky young girl who adds sheep to the practice tests she prepares. One day he adds a wolf commenting on the sheep and a potential romance is born.

Quirky romance that is based on the director's time on the street where the film takes place and the people he met there, this is a film that will either warm the cockles of your heart of annoy the piss out of you with it’s carefully constructed nature and occasionally forced quirkiness.(Yes I know I used quirky twice but it’s that sort of a film). Told largely live action the film occasionally shifts to stop motion and 2D to reflect the mind spaces and flights of fantasy of the characters.

This is a film that I admire more than I like. While its clear the two leads are perfect for each other the film falls down in that it’s so perfect, so expert in construction, that much of the life in the film is as real as the Disney audio-animatronic creature. Watching the film I found that while I was enjoying the film in a completely non-think sort of away, I was also never fully engaging with the film on any level except in the moments with the side characters-the crazy money loving girl or the priest with lots of hobbies. It was for the most part a nice diversion, which cleared the mind after some nasty revenge films at the New York Asian Film Festival.

In fairness I do have to say that the film did almost win me over in it’s closing sequence. Somewhere at the start of the final bit (it’s the airplane sequence) I suddenly found myself being moved. Had director—managed to make the grand emotionally moving ending that he was aiming for? It looked like he did and he had me hooked for a while, until a last minute appearance out of left field derailed the momentum and completely sent the film crashing down for me. While some people needed to see the choice, its really a non-choice which is why the sequence fails.

(An aside- the whole issue of who do we belong with and who do we really love is more expertly handled in The Last Tycoon, which also played at the NYAFF. While the choice in Tycoon may plays with a certain level of emotion the first time through, the second time through it kicks like mule when you see the path to that moment)

For my money Wolf is a good film, but far from a great one, at least emotionally. Will I watch it again? Oh most certainly, but at the same time it’s like any number of other films I like but don’t love and can watch over and over again.

Worth a shot if you like romances.
Posted by Steve Kopian at July 13, 2013