Photos from the cheap seats from July 6 at the New York Asian Film Festival.or A director, an intro and some friends

I have reviews of four films to write up and 139 pictures to go through to see what I can post. I'll get to that in the day light. For now here are a couple of pictures from today of things that made me want to post them first. For the record except for the first two it's all stuff  that happened in the seats among the great people I get to hang with at the movies. 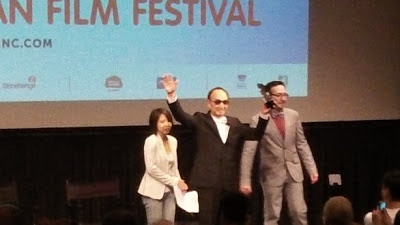 Tsai Yang Ming gets his Life Time Achievement Award. rarely has it seemed that anyonehas  been so genuinely moved to be with people who loved his work. For me it was cool seeing someone who literally changed film as we know it. 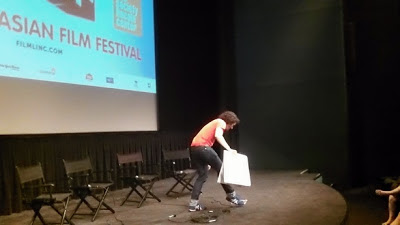 I was too late to get it but the intro to The Black Films documentary was done via cue cards because the person doing the intro was too hungover. It was great and one of the best NYAFF intros ever (Grady best watch out) 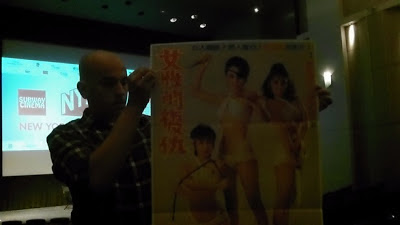 Sorry if this is too dark, but this is Jared from Bullets over Chinatown and his poster for Woman Revenger. Now the reason I'm posting this picture even though its too dark, is simply because I missed the moment in the lobby when he took the poster out to get it signed. First everyone who saw it went apeshit because its a beautiful poster. Then director Tsai Yang Ming saw it wen crazy, because, by the account I heard, it seemed he couldn't believe that anyone had a poster for it or keep it in such amazing condition,. I did see huge smiles on Jared's and Yang Ming's faces but I missed the photo moment of them connecting. And for the record I am sooooooooo jealous of Jared. 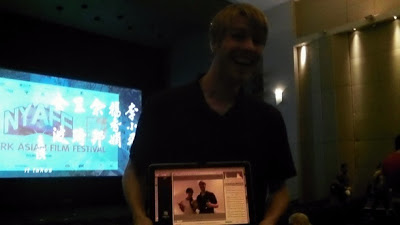 This is Alec Kubas-Meyer of Flixist. This is him holding his lap top showing proof that he actually met Dada Chan and interviewed her. I probably should have made the picture bigger and brighter but I'm jealous that he got to meet her...well not so much that he met her rather that he says he got a hug from her. 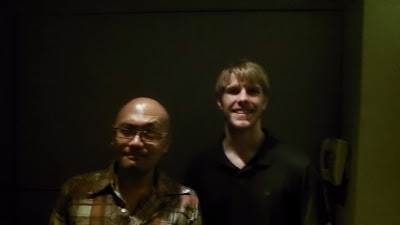 This is a picture of two wanted criminals who are known to be haunting the Walter Reade. If you see them please report them to the police, just ignore the big bald guy with a goatee and moustache who sometimes sits next to them. Actually this is Hubert Vigilla and Alec Kubas-Meyer. They were looking for a picture to use for the Japan Cuts coverage at Flixist. (One where Hubert is more than just glasses and a hat). Crazily they Alec gave me a camera and had me take a picture. When I was done I  pulled out mine and shot this one before they disappeared off to the dark side. 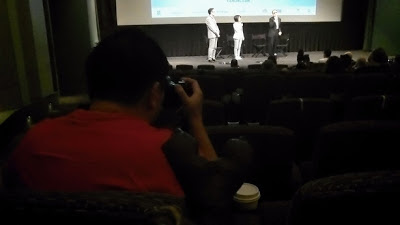 This is MrC shooting video of Tsai Yang Ming doing a Q&A after ITS NEVER TOO LATE TO REPENT. I know it doesn't mean much to you but after he's missed so much of the festival I just want a record that he really was there.(A warning to Mondocurry you're turn is coming soon)

I'll post pictures of the directors and report on the films and Q&As tomorrow, but for now I just wanted to give you a view of life in the cheap seats.
Posted by Steve Kopian at July 07, 2013