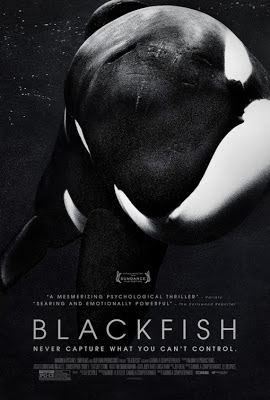 Very good documentary on the weird disconnect we have between killer whales as portrayed by Sea Wold and the rather nasty reality of keeping them in captivity.

Nominally the story of Tilikun, a killer whale captured in the wild and brought to Sealand, an low level aquarium. Several years later Tilkun pulled on of his trainers into the pool and killed her.  With the fun of it gone Sealand sold Tilikun to Sea World for breeding purposes only. The trouble was Sea World didn't do that it, they put him in the shows, and it eventually  killed another trainer (a couple years after killing a man who snuck into his enclosure).  The film uses the Tilikun story to explore the relationship between man and killer whales, as well as performing animals in general.

I'm going to keep this really short  and sweet- see this film. I''m keeping this short because I have about nine pages of notes, nine. Usually I take maybe two, I took nine. I damn near annotated the entire film and my initial draft of this review spelled out everything. I can't do that, it's not fair to you or the film since this is a film that you really must see because it raises tons of very important questions. Its a powerful film that makes you think about things you probably haven't thought about.

As good as most of the film is it gets itself into trouble in two places.  First the narrative thrust of the film gets lost in the second half of the film. the backbone for the first half is the death of  Dawn Branteau and the OSHA lawsuit the resulted from it. The problem is that in the second half, as the film throws its net wider to show the number of incidents with killer whales in captivity (and its only in captivity- they don't bother people in the wild) the film drifts all over the place and stops being about anything and instead is just someone shouting that there is something wrong.

The second place it gets into trouble is that the film raises the question of what our relationship with the whales would be if we didn't have places like Sea World, would they still be cuddly? Would they still be a symbol for conservation? .  It mentions the question in the final third or so of the film and then just leaves it hanging there, which would be okay but with the judges ruling and other matters affecting the future of animal shows and the animals themselves its a tidbit that should have been explored even in a cursory way, I mean will people care about the whales if they can't see them?

That said. A film that you really should see- though keep the little ones away since some of the talk and video might freak them out.
Posted by Steve Kopian at July 18, 2013