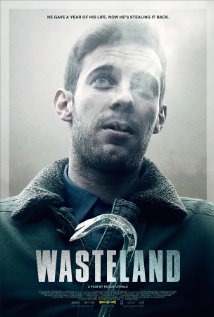 Sitting in a police interrogation room a cop asks Harvey to explain how he ended up there bleeding and under arrest. From there hangs the tale which begins with him getting out of a lock up....

This heist/caper film concerns how Harvey, with the help of his friends, plans on getting revenge on the drug dealer who sent him away for a year on drug charges. Told in a low key style the film is pulls back from the flash and show that we've come to expect with most modern films like the Ocean trilogy, Now You See It, The Italian Job, Usual Suspects or any of the other recent caper films. It should be noted that the low key nature of the film is just as much a blind as the flash is and just as twisty to more or less good effect.

I like the film and I watched about 20 minutes completely confused as to what I was actually seeing. Yes it was an accounting of what happened but up until the point where Harvey details bad guy Roper's methods for misdirection I thought I had simply wandered into a typical British look at the underclasses. Once Harvey begins to get on a roll the film springs to life and I was hooked.

Is this a great film? I don't think so. I know that my strong feeling for the film disapated in the hours after I saw it as the plot holes revealed themselves. I do still like it but not as much as I did when I finished it. I do think it is a little too low key for my tastes and at the same time the film in comparison to some of the afore mentioned caper films who hid their flaws (say an overly complicated robbery plot) in speed pales. Here things take a while to unfold which is fine, but the fact that the film needs to use the final 20 minutes to reveal what really happened kind of disappoints (its too much).

As I said I really do like the film but at the same time part of me feels as though I should have loved this more. That said worth a look if you get the chance.
Posted by Steve Kopian at July 25, 2013