The final night of this year’s New York Asian Film Festival was an emotional experience. The big moment was not the film, rather it was the awarding of the Daniel Craft Award for Cinematic Excellence in Action Cinema . The award was named after the late Daniel Craft who is still a force behind the NYAFF and was bestowed on Herman Yau’s Ip Man the Final Fight. The award was accepted by Dan’s wife Paige on behalf of the filmmakers. Paige was deeply moved by the award

Before the award Grady Hendrix gave possibly one of the best speeches I’ve ever heard. The speech was a powerful explanation of fandom vs hipsterism. It went into how the film festival was created by a bunch of guys who loved the films they were showing, and how that love brought in people like Dan to the fold. It was Dan’s love of the films, of his unabashed fanboyism that drove the festival forward over the last few years despite the fact that there has been a talk of hanging it up because it's such a massive undertaking. Grady added that despite the desire to end the festival, they were no longer planning on doing so because to do so would mean that they would have to give up a connection to a friend that they hold dearly. Grady then went into how the award was created to be given from the fan perspective. It was created to honor films that won’t win thing critically but touch the fans and make them go “Fuck yea.” Grady then called up Paige to the stage to accept the award on behalf of Herman Yau.

Paige’s remarks were a treasure- talking of Dan’s love of the festival, her being okay to being number two to it, and thanking Grady and the festival for eventually paying off her and Daniel’s credit cards.

She was also clearly moved by the award being named for her husband. 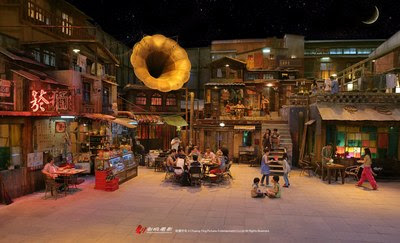 Jay Chou’s THE ROOFTOP is a frustrating film. A musical romance set in a magical realistic world where people spring into song and dance at the drop of a hat, the film concerns Wax a young man who is in love with a young girl on a billboard that towers over his roof top community. He along with his friends/brothers are simply getting by by working hard at a clinic run by Eric Tsang which dispenses medicine and has floor shows (yes, really floor shows). Wax’s brother works for the Housing Commission collecting rents. One day after collecting the rent at a bathhouse the guys hear a scream and see a woman being accosted, stepping in to save the damsel they wreck a movie shoot.. and meet the girl of Wax’s dreams. Will romance blossom?

Of course it will and of course complications will come.

Chou’s film frustrates me. There is so much good in this film, it borders on being one of the best musicals I’ve ever seen, but it annoys me when it stumbles throughout and then crashes at the end into a huge WTF.

I have no problem saying that if you take THE ROOFTOP on a purely moment by moment basis it’s a wonderfully joyously happy film (until the end). It’s a film with great music, great dance numbers and heartfelt romance. If you don’t look forward or back and just dwell in each glorious moment it’s as good and as wonderful as any movie you’re likely to see. The moments are as good as movie musicals get.

The trouble is that the film doesn’t always connect things up. Yes, the film is a kind of memory play, but at the same time things are left out, other things are not fully explained and more things just happen. It’s not fatal, it’s just that it keeps the film from truly soaring.

However what is truly damaging is the final 15 or 20 minutes. As the film races to its conclusion the film doesn’t go dark, it goes black, as we get murder, rape (real rape), bloodshed (in an otherwise bloodless film), a car chase that will boggle the mind of those who were annoyed with the unreality of the ones in another NYAFF film, Confession of Murder. And then there is the conclusion which is by turns out of left field, heartbreaking and WTF. Where does this shift come from? Who’s idea was it to turn “real” after 90 minutes of fantasy? Worse who’s idea was the WTF bookends? As the film ended the audience was laughing but not with the film but at it.

On the other hand if you view the film as pieces its place of magic that I want to revisit several more times- hell the musical numbers are often mind blowingly cool. As pieces Ilove the film.

As much as it will annoy several people who hate Chou and others who really didn’t like the film , I heartily recommend it assuming, of course, you know that it’s flawed.


Lastly I have to say that as with every screening at this years festival it was full of friends old and new. One of the best parts of this year’s festival was that other than an Inaccurate Memoir every screening I attended was also attended by a friend or two. Who said movie going was a solitary business? Its never the case at NYAFF.

Last night the evening began with meeting Mondocurry for a quick bite. This was the first time in several months where just the two of us simply sat down and just talked. We got some slices from Two Boots and just were talking movies and music. It was a nice change. We talked until we had to leave, then headed off to the Asia Society and the movie.

After the film I finally met Dwitt Davis. Dwitt is an imposing figure who seemed to be at almost every screening I attended. I had wanted to make my way and introduce myself to him at couple of screenings but circumstance defeated me. Last night on the way out of the movie we struck up a conversation and he, Mondo and myself ended up walking and walking for a good while before we all hopped trains/subways and headed home. I can completely understand why he was always surrounded by people at the festival, he’s a cool guy.

And with my entry onto the subway NYAFF was officially done for me. Another one down and all that left to do is get ready for the next one in some 50 or so weeks… perhaps a dip into the Japan Cuts pool... or even the Asian American International Film Festival…. Or better yet just some sleep its been a crazy couple of weeks.

Until next year I need to thank everyone connected with the festival, it was a blast.
Posted by Steve Kopian at July 16, 2013