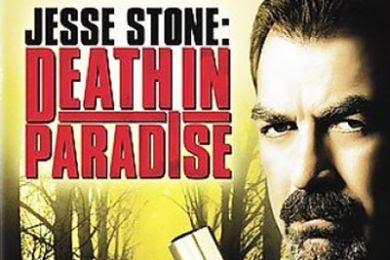 The second film based on the Jesse Stone books by Robert Parker is based on the first novel. Since it’s a story that sets up Jesse and Paradise the film probably confused some viewers when it originally ran on CBS. Now thanks to DVD and reairings the film can be shifted to the right place in the front of the line of Jesse Stone films.

This is the story of the coming of Jesse Stone to the town of Paradise Massachusetts. Jesse a once mighty homicide detective has fallen on hard times and as his marriage to an actress collapsed he took to drinking (but not on the job). He doesn’t expect to really get the job but he goes anyway. What Jesse doesn’t know is that the position he is taking is being vacated by a man who doesn’t want to go. However he knows too much and the corrupt head of the town council (Saul Rubineck) wants him gone. He’s hoping to put Jesse into the position because his reputation is so bad he figures he’ll be able to be controlled. As Jesse tries to pull himself together and not blow the job, a mob enforcer (Stephen Baldwin) working for the head of council takes matters into his own hands and kills Jesse’s predecessor. Had the body not been found as quickly as it was it might have been ruled a suicide but the State Police find evidence that it was murder which send Jesse on the hunt since “it happened on my watch”.

One of the better Stone films shows very clearly that the reason the films work is the characters. A dark brooding affair the film is kind of almost a modern day noir in how down beat everything is. Hell, things are shadowed by the fact that Jesse’s dog is slowing dying. This is not a happy film. On the other hand the film is full of wonderfully drawn characters, from Selleck’s Stone to Suitcase and Molly two of Selleck’s cops to bad guys Stephen Baldwin and Rubineck who make watching the film an absolute pleasure. Frankly the mystery isn’t all that mysterious since we know who was doing what, with the result we just get to watch the characters go through their paces and react to the things that are happening around them.

Dark brooding nature or not its great fun and very entertaining and when I was done watching it on a recent Hallmark Channel airing I was ready to pull out all the other films (I have the whole series on DVD) and wend my way through the lot.

If you like good mysteries and great characters this is a must see
Posted by Steve Kopian at July 18, 2013