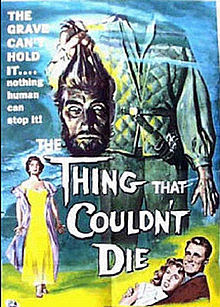 Who but me would spend an inordinate amount of time trying to run down a movie about a dead devil worshiper's who’s body is wandering around trying to find it’s head which was found buried separately in a box? Yes I know this is a sign I should be locked away but I’m on the move so you’ll never find me.

This is a weird 1950’s horror film about some people finding the body pieces of the not quite dead Gideon Drew and how Drew’s head uses it’s will to force people to do it’s bidding. For years the image of Drew’s bearded head on a shelf in a closet haunted me. I had no idea what the film was, it was something I had stumbled upon as a kid on TV and the image haunted me. Then in the days before the Internet I struggled to figure out what in the hell I saw since no one knew what it was, or if they did they didn’t know what the film was called. I spent a fortune on hit and miss horror films at nostalgia shows trying to find it. Eventually I found a reference to it in the Overlook Horror Encyclopedia, which I’ve read from cover to cover a couple of times, and the hunt was off for the right film. Trouble was no one had it for sale.

Eventually I found it… and it really isn’t all that good. Sure the Drew's head stuff is eerie but the rest of the film is mediocre.

At this point you’re probably wondering why am I recommending the film. Simply any film that has hung for me for decades has to be noted. Good bad or indifferent the fact it sent me on a hunt means something.
Posted by Steve Kopian at July 20, 2013