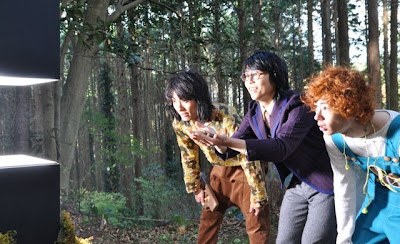 My final trip to the Japan Society for a New York Asian Film Festival screening was for WARPED FOREST. I was also supposed to stay for Ruroni Kenshin but because of trains I headed home.

The screening was low key. I met Alec inside and kept a seat between us because I had to put my Criterion Collection haul somewhere other than under foot (hey 50% off at B&N).

The introduction was largely a discussion of how tired everyone was and how they had just woken up.

The film itself involves a dual story of sorts, of a several people having weird experiences around a hot spring. And another story, set in a dream like world with weird fruit, strange guns, trees that are women and other odd sights.

Its a kind of sequel to FUNKY FOREST, made by one that films directors...

Writing about the film is extremely hard. Part of the reason is that the film is an almost random series of connected scenes which kind of come together at the end into something that is worth trying. The other reason that the film is hard to write about is that the film is ultimately an amusing trifle and nothing more. Don't get me wrong, its really good film, It just doesn't produce a great amount of words on my part beyond saying I liked it.

After saying good bye to Alec I headed out and headed home. I ran into Lee who was taking a break from the festival, she had seen Kenshin, and was going off to get something to eat and kill time. We talked about the films over the last couple of days as we walked away from the Japan Society. Two blocks over I parted ways with Lee- I went home and she went to hunt for Criterion films.
Posted by Steve Kopian at July 15, 2013