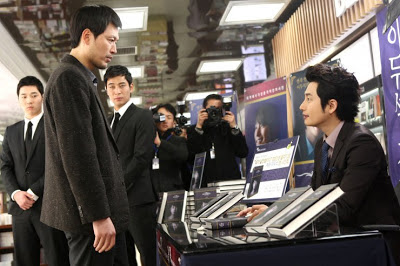 Another wow film at the NYAFF. This is simply put one that needs to be seen with a big tub of popcorn and a soda (or beverage of your choice) on as big a screen as humanly possible.

The story begins with  a cop battling a serial killer. His attempt to arrest the masked fiend goes horribly wrong (they crash into a restaurant and it goes from there) and he gets away. Fifteen years later, two years after the statute of limitations has run a man comes forward to say that he is a notorious killer, that he is sorry, and please buy my book. This sets in motion a series of events will leave many battered and bruised and a trail of destruction.

This maybe the grand popcorn film of the NYAFF. Funny,bruising, action packed with enough twists to make several bags of pretzels this is one of the most fun action films I've seen in a long time. Rarely do action films get the balance between serious bone crushing action and smart ass remarks right. Nor have action films ever really been self aware enough to do some things that are clearly absurd (The car chase with the ambulance) and yet still have you grasping the arm rests.

I absolutely loved this film despite the fact it doesn't make one lick of sense. This is one of those films that starts big,  pulls you into its own alternate universe and then rockets off on a thrill ride. You know none of it makes any real sense but you don't care because you're having such a good time.

This film is such a must see film that (cough) I'm bummed(cough) by this sudden (cough) cold I've caught will keep me from seeing this(cough) later today.  Hello  (cough) boss? I'm not feeling too good.... no (cough) I think I'll see my doctor at Walter Reade.....
Posted by Steve Kopian at July 03, 2013