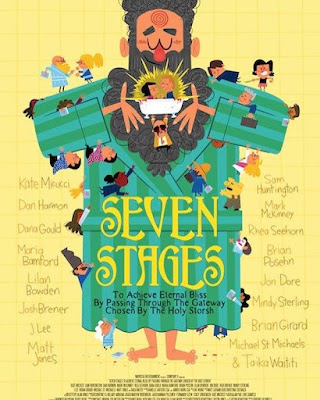 The biggest laugh I got from 7 STAGES... was after the film when a friend who suffered through the film with me told me that now that his plans for after the film was to either "get food or find a bathtub and kill myself".  That may not sound funny but in context of this god awful film it had me doubled over with laughter. it was a feeling that I shared.

A young couple moves into a ridiculously cheap apartment unaware that the reason its so cheap is that members of a cult almost daily show up and kill themselves in their bathtub as means of going to nirvana.  As the bodies pile up the couple get more and more rattled.

I have no idea what happened to the film with the cast and the basic idea  this should have been a great film. Instead it's a film that tries so hard to be funny it' becomes horribly stupid.  I blame director Vivieno Caldinelli who plays it mostly for laughs except when he doesn't.  What's worse his idea of comedy is to have the uneven actors mug shamelessly. The result is some truly terrible performances and lots of jokes that are dead even before they get to the bathtub.

I have to think that this worked on the page and then it all went wrong. There is some good stuff here- or what could have been had it been played straight instead of for laughs. The idea of a wacky comedy was just a bad idea.

I hate this film. Other than one sequence and a great performance by Taika Waititi, who should have directed this, this was one of the most painful screenings at this year's Tribeca.

Not recommended.
Posted by Steve Kopian at April 18, 2018

Email ThisBlogThis!Share to TwitterShare to FacebookShare to Pinterest
Labels: black comedy, not worth the effort, tribeca 2018