LOU ANDREAS-SALOMÉ, THE AUDACITY TO BE FREE (2016) 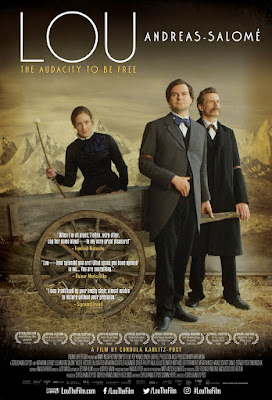 Give this film bonus points for being audacious but outside of that this is a good but unremarkable look at Germany's first female psychoanalyst.

It begins with the arrival of desperate young man at the door of Andreas-Salome who needs the great doctors help. However it is Germany in the 30's and the "Jewish" science of psychoanalysis has been banned by the Nazi's. As he begins to convince her to help him she flashes back through her life and we see the course she took and the people she met and influenced.

Great looking and well acted the film suffers from a certain sense that it is a very important film. Andreas-Salome lived a life that was anything but conventional, she was the very definition of a free spirit and knew and influenced Nietzsche, Rilke, and Freud. Her work shaped Freud's, particularly with her work on female sexuality.. Unfortunately the film follows the conventional path of telling her story. This results in an intriguing film that isn't always up to its wonderful subject. We can admire what it is doing but we aren't always invested in it since it is trying to hard to make us like it.

While the film isn't as great as one would hope, the film is still very good with some truly wonderful performances, especially by all the women playing Andreas- Salome. It is worth a look for those with an interest in the subject or a love of great looking historical dramas.

The film opens this Friday in New York and next Friday (April 27th) in Los Angeles
Posted by Steve Kopian at April 18, 2018